From offline to online – how it happened in Tarnowskie Góry 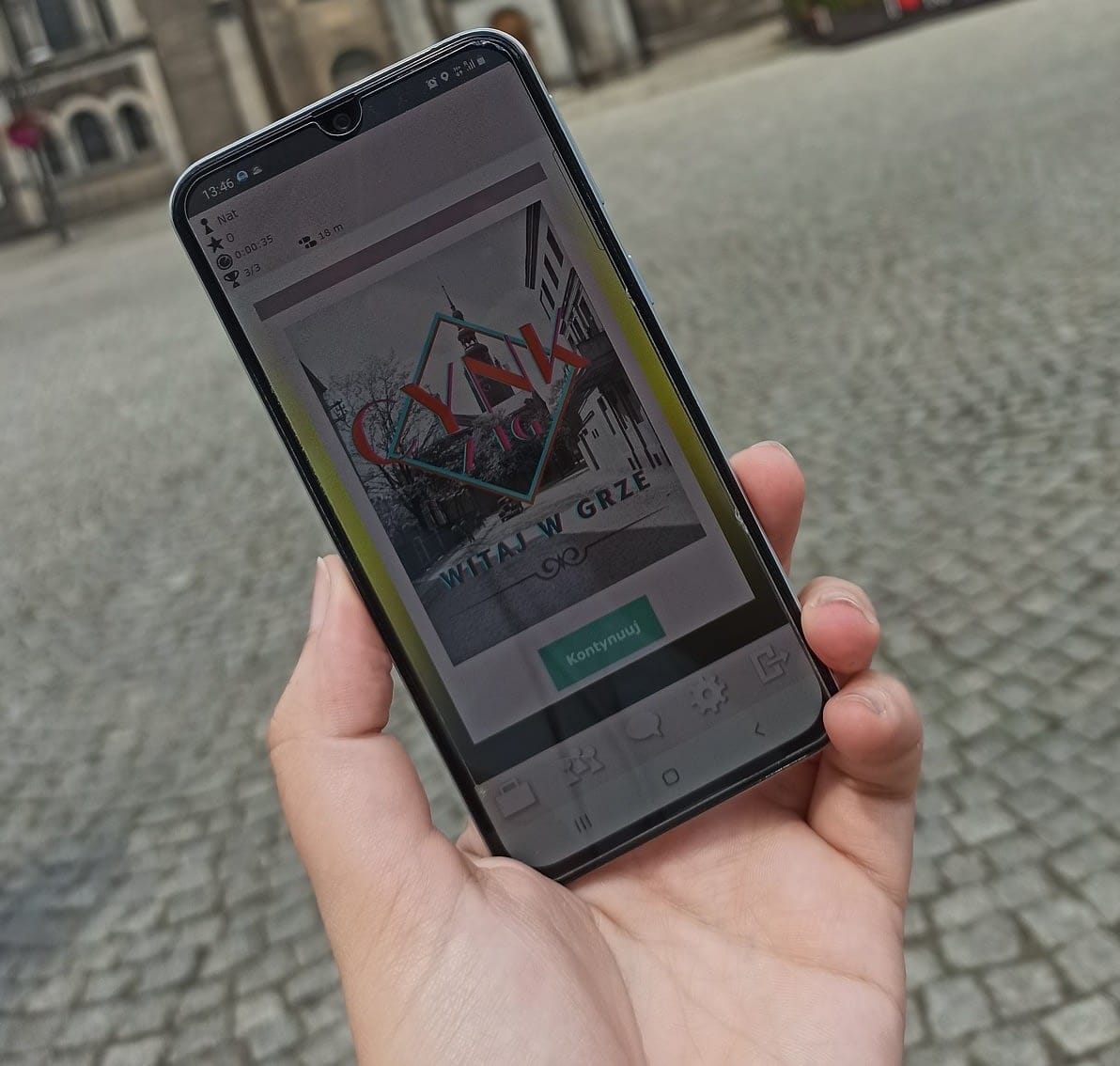 I meet again with Anna Gołkowska-Dymarczyk and Sylwia Jata from the “Góry Kultury” Association in Tarnowskie Góry We started our previous conversation with the live projects of the  Góry Kultury Association (you can find more here), and today we will discuss  the use of digital techniques, the role of the Internet in the  Association’s activities.

How did it happen that you started using new technologies and what is the origin of the “Cynk TG” application? Is this a lockdown effect or a natural turn of events that at some point you created a city game that used QR codes and was more digital? And the second question, concerning the way you use social media, how does it help you with your projects – not just in terms of promotion but also implementation?

Anna Gołkowska-Dymarczyk :  It will probably be easier to answer the second question first, as it is shorter. We use social media chiefly for promotion – that goes without saying, but it must be stressed that because the Association is based on passion, everything is done rather spontaneously. We still do not have people responsible for social media and there is no rigid division of tasks.

Sylwia Jata: It is worth mentioning that we have been developing this a bit by trial and error, because, for example, at the beginning each of our events had its own fan page, which later disappeared in the depths of Facebook and the whole Internet. So we have learnt how to manage that field so that everything was under one banner, one umbrella, pointing to us as the organisers. That has made it easier to find out about our activities.

A.G.-D.:  However, it is worth noting that we also make posters and have not resigned from this traditional form of promotion. When it comes to the first question, I think it is actually both. This is the natural order of things and an effect of the pandemic.

S.J.: Also, I need a broader context to answer the question. For example, we had a Year of Tyrmand event, which was held online as a meeting of authors, but we felt, we knew that it we could do much more. Besides, there were simply so many of these online events that it was impossible to attend them all, even though they were extremely interesting. When all the gyms were closed due to the lockdown, but you still needed to take care of yourself and remain active, namely walk the famous ten thousand steps a day, we decided to … walk. And various aspects started to integrate. After all, everybody has a mobile on them…

A.G.-D.:  Of course, we had already heard that city games were moving to the Internet, but in our Association there was no particular “application” or Internet person to say “Hey, let’s do it.” So that’s probably why we didn’t think of it before.  But owing to the ten thousand steps a day and the decision to announce the idea of “culture in the Net” as the city’s priority, Sylwia and I decided to transfer our experience in creating city games to the Internet.

S.J.: The launch of the app “Cynk z TG” took place on 27 June 2021, on a Sunday. To be honest, we were very anxious about whether people would really be interested in such an event, but what happened exceeded our expectations. There must have been 20 teams at the start line! It was a crazy day! We have also created a video on how to use the game – it’s a bit of an instruction manual for the app (link).

A.G.-D.:  Facebook groups in Tarnowskie Góry are very active and I always put all our events on there. It is always well received, as people can get to know what we do and offer to them. Although we also use the word of mouth method. 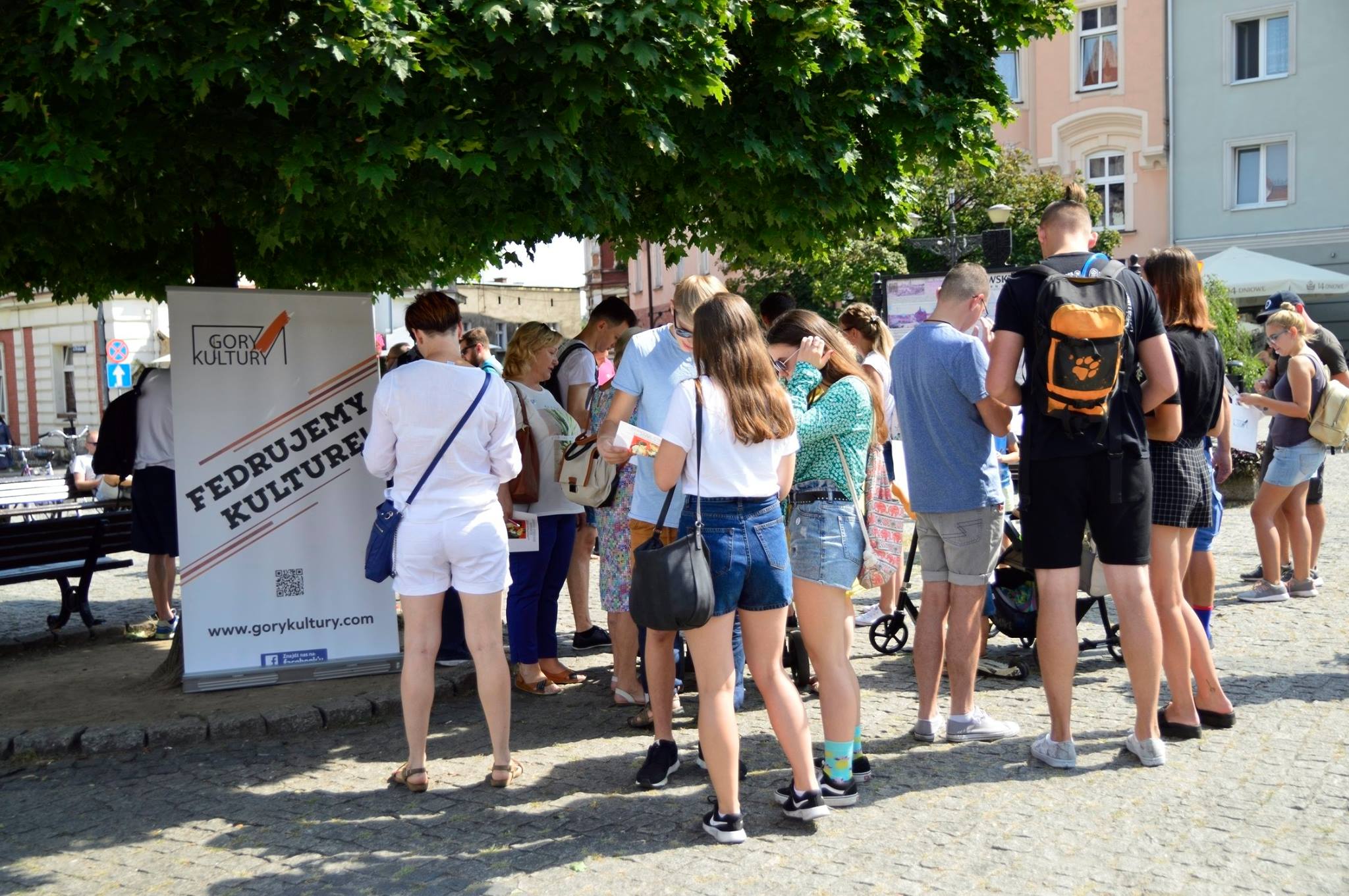 The app offers a ‘walking’ and the so-called ‘couch’ version – the latter of which I played. It’s interesting and engaging. But I have a question about the participants themselves – you talked about 20 teams on the launch day. Who came? Children, families?

A.G.-D.:  Children, families, senior citizens… Actually, the entire social spectrum of Tarnowskie Góry residents and more! For example, there was such a great elderly couple – I remember their comment at the finish line “well it’s the first time I’ve had something like this on my phone and I loved it, I’ll tell all my friends”!

S.J.: And the only thing they couldn’t do was… to take a selfie, although we thought that would be the least complicated, and certainly easier than operating the GPS in such a way as to check all the points on the route.

A.G.-D.:  At the end they said that they would send this selfie later… There were a lot of children, families, some couples. There was a couple who told us they looked for this type of attractions and that this was their way of spending their free time. 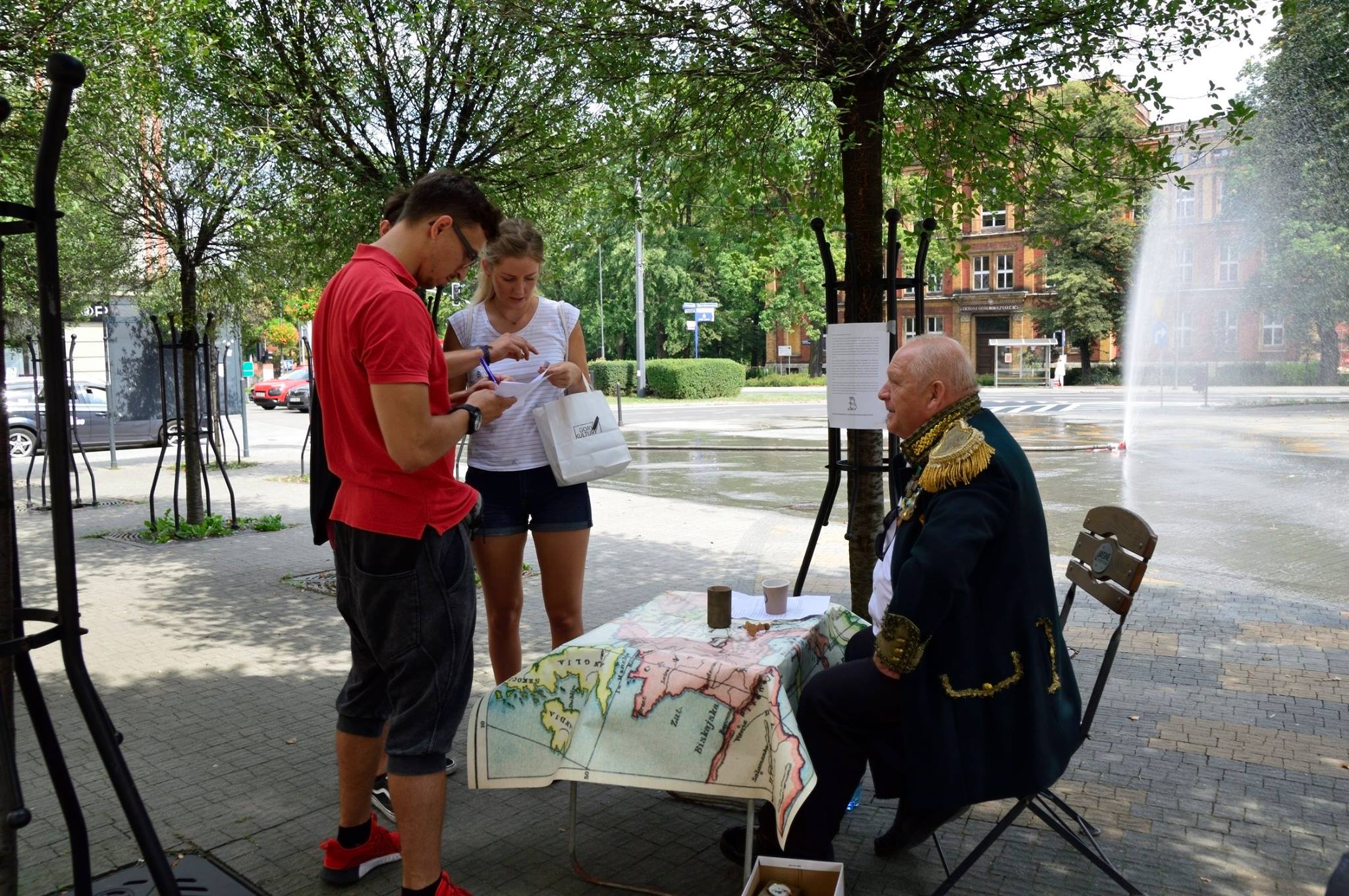 Will there be any continuation of this project? You can still download the app, but is there a time limit?

A.G.-D.:  The game will be available until July 2022. However, from September on, if schools operate normally, we will promote it among students and teachers, for example as and aid for regional or local history lessons. Even though Tarnowskie Góry has monuments listed as the UNESCO World Heritage [Lead, silver and zinc mines with an underground water management system in Tarnowskie Góry] and we really do have something to boast about, we are about actual involvement. This is not meant to be another boring official guide! The direct inspiration, the idea for the application originated earlier, in response to another competition, dedicated to the period when Poland was regaining its independence. We didn’t receive funding in that competition, but the idea to focus on that era remained and grew.

S.J.: Then, we asked ourselves – what happened here in Tarnowskie Góry at that time? We asked our historian friend and he told us a great story about how, after the mine closed, smart people came to power and built schools, hospitals, how much was happening in a town with relatively few people! So many pubs and cafes appeared at the time that even today people visiting Tarnowskie Góry are surprised by the sheer number of such places around the market square. How come? 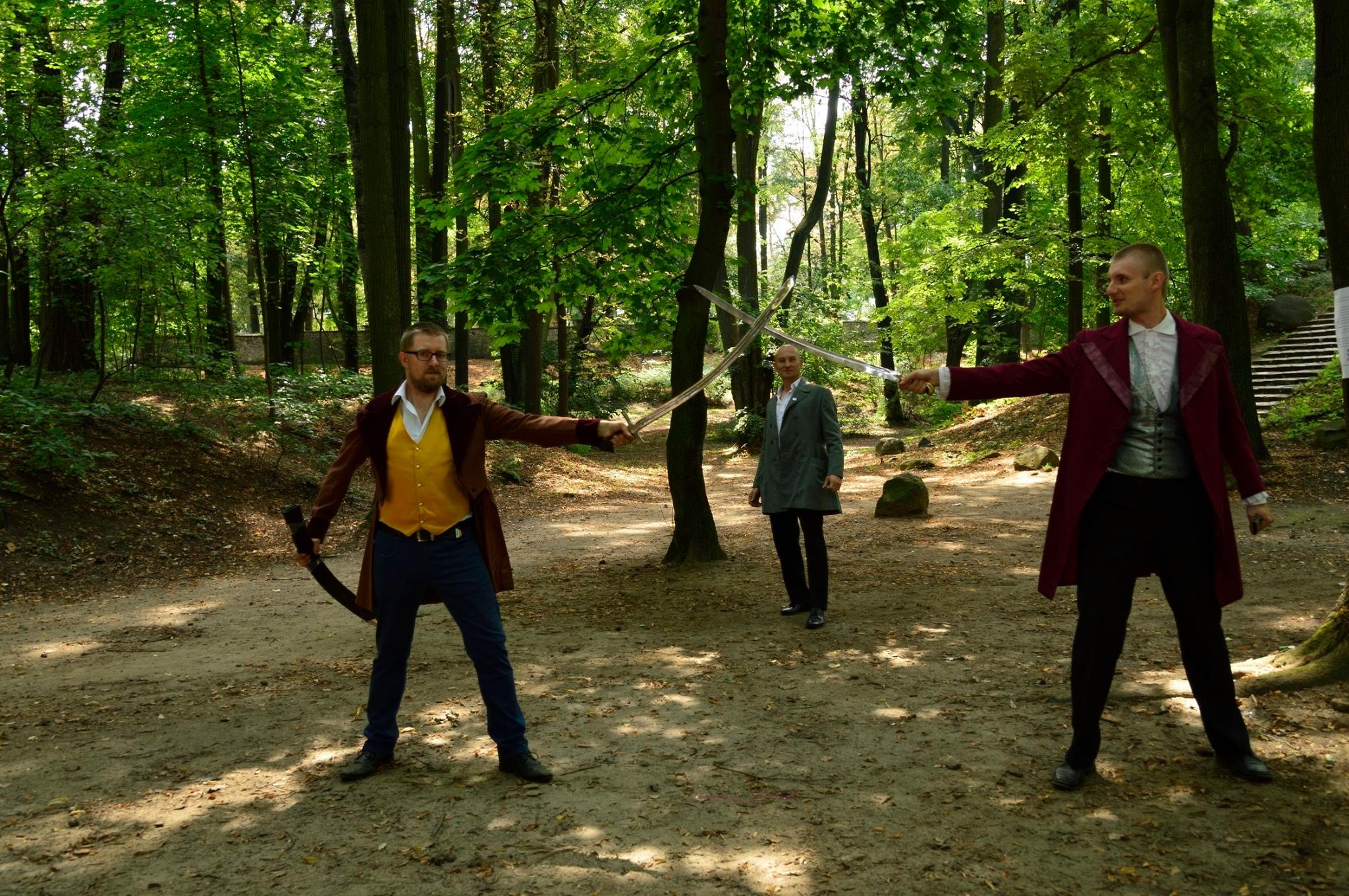 S.J.: Well, that is the question we have asked ourselves!  Why? And this is how our project started.

A.G.-D.:  Usually, when mines close, the natural consequence is that the town simply dies and decays. But in Tarnowskie Góry something unusual happened, because the city’s wise authorities decided to take advantage of the fact that the city was still riding on fumes of its former splendour and decided to build schools, lots of market places appeared. They also took advantage of the local railway junction, one of the largest in the region, the meeting point for many trade and railway routes and consequently, for many visitors. Visitors need accommodation, food or may even open their businesses. With the game we wanted to show how many pubs, cafes and places of entertainment were in Tarnowskie Góry in the 1920s, and that there used to be a clothes shop in the current town hall building. We wanted to remind the players where the people went to eat and drink, but also where it was not allowed to drink or dance. We wanted to present such interesting facts to show the history of the city in a different way.

S.J.: We wanted to show that it was not only the times of the mines shaped the town, but that the 1920s, the inter-war period was also very important and city-forming. But an equally important issue were the older residents’ memories, as there are still people who remember what each building housed, that there was a certain pub or a cafe on the market square. We wanted others to hear these stories and memories. The 1920s were already photographically documented, that’s why it was such fun looking for the information.

I would like to ask about the cooperation with the creators of the application – coders/developers – I am not sure what the right word is. How did it go? What was it like? You said it yourselves that there were not many IT lovers in the association. How did they transfer your vision into the virtual world?

S.J.: We had a fairly clear vision, but the difficulty was in communicating it clearly to the developers. Eventually, it worked out and came out great, even exceeded our expectations.  Nevertheless, there were a lot of meetings, a lot of initial scenarios, initial ideas about how to structure the story, in what convention. We also had to take certain limitations into account. For example, you can’t have long texts in the application – that would bore the user, instead they must be engaging, interesting and give the rhythm to the whole route.

A.G.-D.:  Certainly, the challenge was in turning the inspiring story of the historian we cooperated with into a game. We had to decide how the game would show the former function of a certain place. What task or puzzle to create?

S.J.: Another difficulty was to choose the right locations to visit so that the route would make sense and avoid returning to one place too many times. During the testing phase, many interesting places were rejected, because they were too far and would make you go back the same way or the route was not attractive enough or too complicated. Sometimes the GPS located a certain point, but in the middle of the road and it was impossible to rectify it, so we had to give up the location too. There were many such technical issues .

And what was the added value of having an app?

A.G.-D.:  I guess it’s the fact that there hasn’t been anything like this in Tarnowskie Góry so far. And that it is still functioning – that you can use it. It was not like before, when the event took place and apart from photos on FB nothing was left of it.

We encourage everyone to try out the app at http://www.gorykultury.com/aktualnosci/175-gra-mobilna-cynk-z-tg and visit Tarnowskie Góry! Thank you for talking to me!

President of the “Góry Kultury” Association. She loves the fashion and all the 1920s-1950s things. She can’t imagine a day without a book or a conversation about books over a cup of coffee. 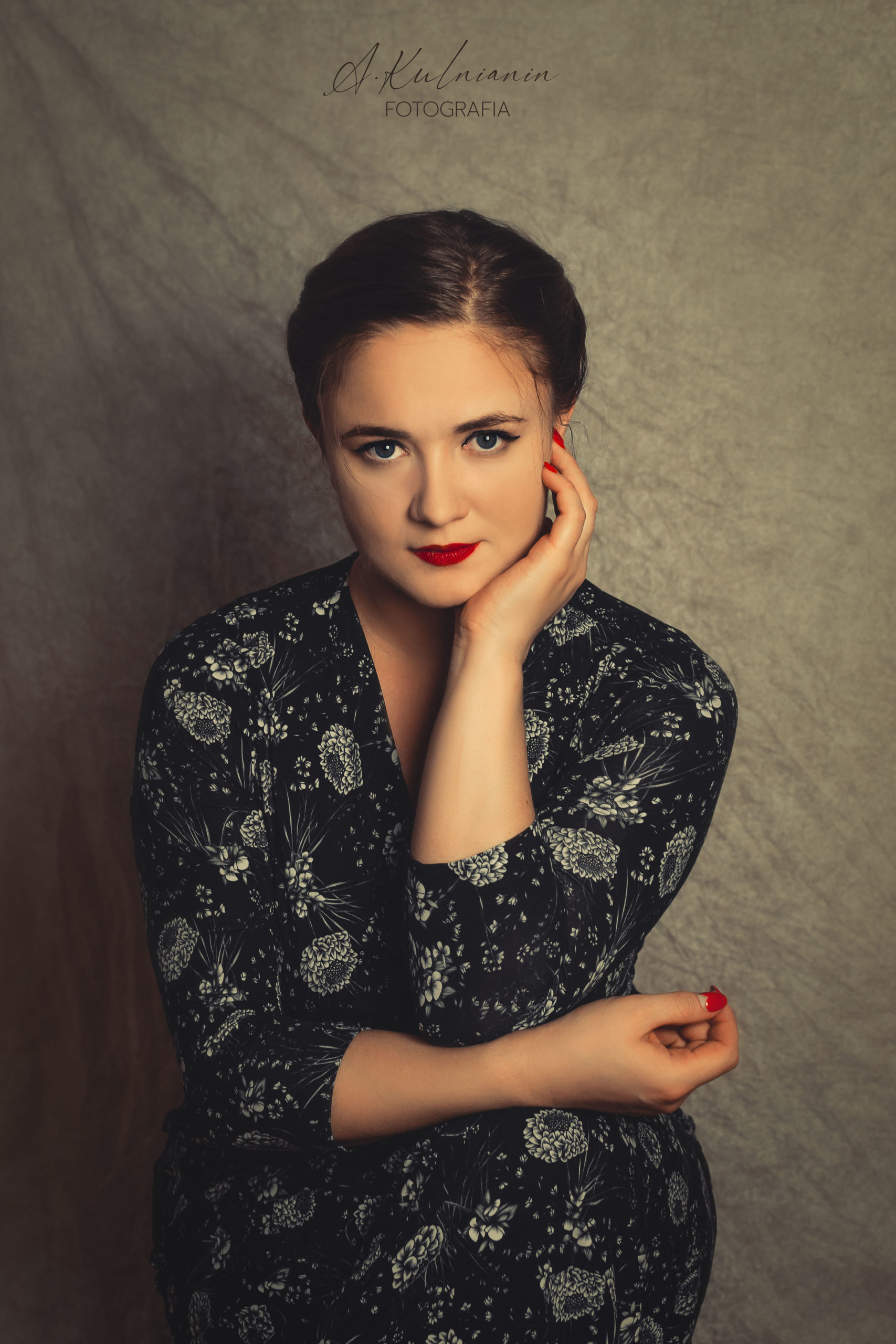 Passionate about local history, for years associated with non-governmental organisations in Tarnowskie Góry, she has organised many events for commercial entities and in cooperation with cultural institutions. In her free time, she reads and watches almost everything. 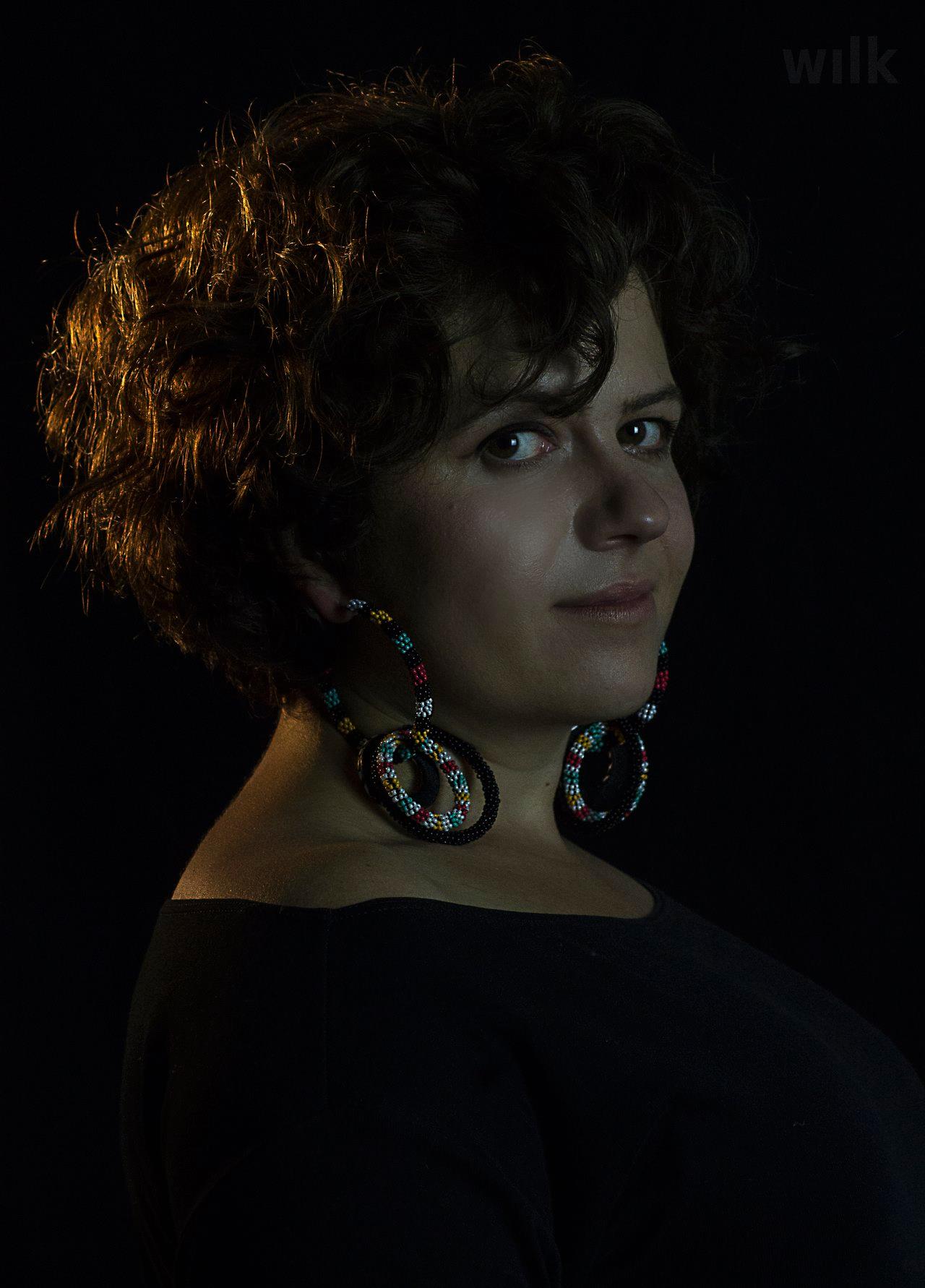